Last Thursday, I went home sick -- I had been fighting a bug for most of two weeks and gave up. After napping a bit, I got a call from my brother asking for help from Pat and I to rescue a seagull with its feet bound together on the beach. Although the bird could fly and would thus be next to impossible to catch, we grabbed a bedsheet to use as a net and a pair of scissors with which to cut whatever bound the feet together, and got in the car. Who am I to turn down a bird in distress?

When we got to the beach, we could not locate the gull in question. We were helped by the presence of a nice man feeding a loaf of bread to the birds -- all of them came and milled around looking for a handout. We examined feet as well as we could and none of them seemed to be in any trouble. The bondage bird must have moved along the beach.

However, a juvenile brown pelican came up walking awkwardly and accepted bread. This is very weird behavior for a pelican, so we worried. We were soon joined by Gavin and Maria, a couple of sand-stained beach bums who had been following the pelican. "He's got a hook in his wing," Gavin said. "I can't stand to see him this way. I wish I had a net."

"How about a bed sheet?" I offered. He looked at me like I was crazy enough to offer strangers bed sheets on the beach every day. We explained why we had come.

Still in our office clothes, Pat, Robert and I helped Gavin catch the poor bird. Once they had dodged the lunges of his formidable beak and pinned him under a sheet, they held his beak shut and carefully removed the TWO hooks and long line and tackle binding the wing. We turned the bird loose, but he could still not fly.

So again we captured the pelican -- swarming with thousands of revolting mites -- and called Pacific Wildlife Care Center. Then we took the bird from vet to vet (those that work with the center) to get him checked out and x-rayed.

Pat and I are volunteers for the center, so when we offered to drive the bird to Morro Bay, they accepted. Pat drove, and I tried to keep my cool while covered in dozens or hundreds of mites and holding a precociously clever and entirely terrified pelican.

Pelicans are big awkward birds with preposterously swordlike beaks... but they weigh only about 5 pounds. There are multiple layers of air between layers of skin and fat that make them buoyant. So although they look like pterodactyls that could easily carry off, say, a middle-sized sheep, they feel like fuzzy pillows. They have beautiful, mobile eyes and expressive faces, and the elastic throat pouches are soft and resilient -- somewhere between "ear" and "scrotum" on a tactile scale. In a word, they are lovable.

And now I've been pooped on by six species of rescued wild birds. It's pretty much par for the course. (Good news: after pretreating and repeated washings, I did save my work pants.)

I am happy to report that there is no damage to the bone and although the bird is certainly hurt, his prognosis seems, knock on wood, to be good.

Here is a note from the center:

"Just checked in and your "pelican" is doing quite nicely so far - he's in the large fly-pen (you likely saw it on your way in last week) with a couple of others & is eating & recouping...
We'll be watching for him to strengthen that wing and start flying - I know the chart says to let you know when he'll be released down in Grover. We'll certainly attempt to honor that request....a lot depends on how busy the center is, who is available for transport etc."

So, happy birthday to me. My little pelican friend is doing well.

If you do not volunteer or donate to a wildlife shelter, I really recommend it -- if you have the temperament (and requisite lack of caution) to handle injured wild things. I am very fond of Pacific Wildlife Care.

P.S. Bird mites are species specific and only require a shower and shaking out one's clothes to be gone. However, they are pretty gross nonetheless and I felt like I had cooties for days.

* Pelican photo lifted from www.dpughphoto.com
Posted by Ducks at 8:21 AM No comments:

This picture was simultaneously ridiculous and not too shabby, so I thought I'd share. I just came from my joint birthday party with officemate Patty, whose birthday is today, and it was fun: potluck and silliness at work and thoughtful gifts.

I work with nice folks. Really nice folks. I like the birthday potluck tradition; if insurance ever goes bust, we can always open a restaurant. We do pretty well. Today was mac & cheese and Frito pie (called "chili boats" by my coworkers... what do YOU call it?) and vegetarian lasagne and various crudites and fruit salad and warm homemade pumpkin pie and lemon bars (my favorite). Yummy. 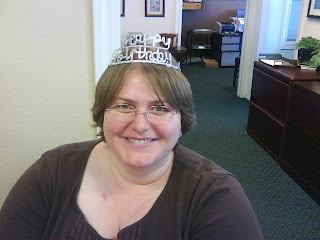 The deer-in-headlights look is due to being photographed on a cell phone: I have no idea where the lens is and didn't have a clue where to look or when.
Posted by Ducks at 1:14 PM 3 comments:

Annoyance of the day: I just got spam in my email with the subject line "Obama's Top Video." It contained a not-worksafe picture of a harlotty young woman and a Viagra ad. Very funny.

I suspect that this was forwarded to me by someone hax0ring one of the politically affiliated lists that send me junk mail every day, or by an etailer to whom I was maliciously referred after writing a letter to one of my representatives or someone else who should not abuse the privilege of knowing my email address.

Nonetheless, grow the hell up, people.

And no, I do not want to buy your devil drug.
Posted by Ducks at 1:43 PM No comments:

Time to update my contacts

If you read this blog, do me a favor and email me your contact information. I have, through technical and organizational reasons, lost almost all the email addresses, phone numbers, street addresses, birthdays, etc. I ever had for everyone... and anyone who knows me knows that my brain is a sieve that cannot be trusted with that kind of information.

If you are kind enough to send me info for friends you know who do NOT read this blog, you will earn a special merit badge or Mao button or something. That is, if I can find it.

If you have lost my contact info, let me know in contacts and we'll work out something.

This article gave me a genuine chortle and all the sympathy pangs that good political rants do. Sure, it's stating the obvious, but it's stating the painfully obvious with evident pain... and for some reason that hit my funny bone today.

I am giving you the link to the OCA's reprint, not the original article, because I don't know whether or not the original source (Alternet) is worksafe. I do try to be a decent citizen, and a decent employee, too. :)
Posted by Ducks at 10:39 AM No comments:

I am not sure the answers will be as interesting, but the questions reveal a lot about the people asking. Some investigative reporters are clearly muckraking, while others clearly have public interest in view... and still others seem either to be following some angle that is unclear, or are moonbats, or are simply baffled themselves and hoping that a shotgun approach will yield some interesting nugget that can be spun out (or just spun) into a story.

What would YOUR questions be if you were looking for information on Sarah Palin? Some of these questions resonate with my vicious-bully instincts, while others set off my political hot-buttons... but I'm not sure what I would ask, if it were my job to do so. I hope I'm not that passive a consumer. I'll think about it.
Posted by Ducks at 8:52 AM 7 comments: