My dad and stepmom just visited us, and it was a really nice visit, marred only by us catching a plague that seems Of Biblical Proportion because Pat is teaching four classes plus handling family visit and because Fletcher is 7 months old. They were here for Father's Day, and we had a terrific barbecue-get-together thing. My stepsister came too, bringing her three sweet little kids (who were very excited to meet Fletch) and so all my dad's kids were there. Yay!

For this event, my stepmom made a tasty dessert. I noticed it bore some resemblance to Paula Deen's "gooey butter cakes" and was just on point of asking about it when she presented me a handwritten, water-stained recipe.

"It's your Grandma Rose's 'Tea Brag,'" she told me. "Your grandmother, Grandma Rose, well, I guess she called it a 'Tea Brag,' I think that's right... I think she'd like for you to have it, and make it, her Tea Brag, this is her recipe anyway."

I love my stepmother. She does have occasional fits of batting at the English language like a cat with a toy or a bird trying to get out through a screen door, though, so I abandoned the momentary impression that she'd had a stroke and was trying to say "tea bag" for some reason. I gave her the ol' "do what now?"

She handed me the recipe. Sure enough, it was labeled "Tea Brag." Huh. I've heard of buckles, slumps, bettys, grunts, pandowdys, etc. but never a "brag".... but wait, back in the murky depths of my teenage holiday memories I remember Grandma calling this cake a "brag." Weird.

So I did what any sane person would do: I told Pat about it in the car and told him about its weird, rednecky ingredients miraculously forming a squishy sort of fruity cake. He shuddered in horror. He actively dislikes many of the ingredients and has the luxury of being snobby about cake, since I bake most of ours from scratch, and I have a knack for cake (unlike pie crust!).

And then he googled it with his iPhone. In moments he told me, "It's a BRACK. Tea brack. It's an Irish recipe."

Every recipe for Tea Brack that I found bears zero resemblance to Tea Brag, but I think it really is the inspiration. The thing is, the recipes for Tea Brack are so mad, so completely crazytown, that I had to make one.

I dug out my Irish cookbook (yes, I have one.) And that's just what I did -- I made Tea Brack. It's a boozy sort of fruitcake/bread pudding affair. Yes, make one. It's awesome in a kind of I Have Gone Mad And Will Now Cook With Booze-Soaked Prunes kind of way.

Anyway, for your delectation, here are both recipes. I am doing you the courtesy of halving the Tea Brack recipe because honestly, nobody needs two huge bread pans full of this stuff. A little goes a looooong way and having eaten one slice, I feel like I've had a reasonably stiff drink. Yikes.

Tea Brack, the way I made it (only halved because the original recipe lied to me and seriously, you do not want two of these the first time you make them)

ONE POUND of dried fruit, mixed of whatever. I used prunes, unsulfured apricots, dried cherries, raisins, and some dried cherries I had around from another project.
1 1/4 cups brown sugar
1 cup Irish whiskey (but I used Southern Comfort because I am a redneck and that's the whiskey I had)
1 cup strong black tea, preferably Irish Breakfast but I used double bergamot Earl Grey
1 1/2 cups flour
1 teaspoon "apple pie spice" (cinnamon, nutmeg, and allspice evidently. I got lazy and used pumpkin pie spice -- which I had -- and a little extra cinnamon and nutmeg)
1 1/2 teaspoons baking powder
1 1/2 eggs (you could probably just use two and use a wee bit more flour. I won't tell. The original recipe makes an ass-ton and uses 3 eggs, so I am doing you a favor here.)

Mix the fruit and sugar. Pour hot tea and room temperature whiskey over, and leave to soak overnight. I forgot to cut up the fruit into reasonable sized pieces, so after soaking, I tried to cut it up in the processor; this made the part I did this to resemble mincemeat or a coarse, lumpy puree, so I gave up and used half un-cut fruit and half minced soaked fruit. Don't be like me. Cut your fruit before you soak it, unless you forget and are like me after all.

Take time to giggle fiendishly about how preposterous this recipe is. Consider using just dried apples and uncrystallized candied ginger next time. Consider what all this dried fruit and booze will do to your insides. Stop considering.

Mix in eggs, flour, spice, and baking powder. Turn mixture into a well-greased 9 X 5" loaf pan (that's the big fat loaf pan -- seriously, I have four and only one is that big). Bake for an hour at 350.

Online sources will tell you that this is nicer when underbaked a bit. They fucking lie. It will be mooshy even when it is properly done. Bake it for the full hour. Hell, give it another 5 minutes. Maybe more. Keep an eye on it, it's trying to get away with something.

Allow to cool on a rack in tin for a few minutes before turning out onto rack and cooling some more.

Believe it or not, this turns out pretty festive. Tasty but very sweet and gooey and sort of undefined. I'll leave my feelings for margarine and cake mix out of it, and Pat's feelings about coconut and nuts in cake... really, you should make one some time when you are feeling lazy and sweet-toothy and have to make dessert for a crowd. It's fancy. Faaaaaancy.

So because I do an incredible lot of baking in summer, because evidently my inner thermostat or common sense sensor is broken, I was making a cake. And it overflowed the pie pan it is prepared in. And even though I thought that this pan was bigger than the one that had previously PERFECTLY held the same recipe, it was smaller and I don't fail like this often. But it overflowed and sent berries and cake and sugar onto the floor of my oven and it burned like blazes. (As an experienced baker, I am embarrassed. Seppuku with a pie wedge will probably follow.) So...

I tried an oven cleaning tip I picked up on the Internet. Now, Sally Homemaker, I am not. But I got tired of setting off the fire alarm every time I bake anything above 350 degrees -- which, as you recall, is often in the summer (partially because I know I can open doors and windows to let the smoke and fumes out in summer, whereas in freezing weather it is less practical) -- so I looked up oven cleaning tips. A year ago. And continued to just unplug the alarm and fling it across the room when it went off every time I baked, until the boil-over.

The fire alarm issue was the result of me setting the oven on fire three Thanksgivings ago when I made candied bacon to top a dish. Candied bacon is delicious, but it's baked atop parchment paper. I unfortunately stuck it in the oven right after turning off the broiler (which cooks above Fahrenheit 451) and boy, does pork fat and brown sugar and paper burn bright! Got to show Pat you can put out kitchen fires with baking soda, so I managed to impress him despite rookie firestarter behavior. Hat trick!

So back to the boilover. It was foul and left a thick burned mass reminiscent of those awful Fourth of July "fireworks" "snakes" that just smell bad and grow and grow. Yuck. It necessitated action.

Here's the thing: put baking soda on it and keep baking. Later, scrape out the majority. Mix baking soda and water, put in a cheap garden mister and mist the oven just before every time you preheat. It'll pull the burnt grunge and ash off the walls and you can just mop it out later with a damp sponge. No elbow grease, baby!

Having accomplished this and still astonished at the efficiency of the operation, I decided to make corn casserole. It's rednecky wonderful and I jazzed it up a bit to pretend it's Mexican because I am pretty sure Pat preferred the quesadilla option for dinner and was just being polite.

*1 1/2 sleeves saltines, because you know you bought a box to eat chocolate frosting on, but you don't have any more frosting and, you know, buying more for stale crackers would make you totally hate yourself
*2 cans cream style corn, which you totally have in the cupboard even though you have no idea why the hell you keep buying it
*half a can of evaporated milk, same shopping drill as the corn
*one small can of minced green New Mexico chiles, because you're guilty about the quesadillas after all
*a pitiful looking hunk of cheese, grated, to give a quesadilla feel to the thing (yeah, sure it will!) and because fuck it, the original recipe I learned in the 70s used a lot of butter and cheese won't make this worse for me. Hell, corn was considered a vegetable instead of a starch back then! Cats were dogs! It was madness!
*a heavy pinch of cumin seeds to make it more Mexican-ier
*a heavy shake of black pepper because corn loves pepper
*shortening, because I don't grease pans with anything else

Grease your casserole dish. Poke some small pinholes in your saltine sleeves, and crush saltines beyond recognition. Mix corn, chiles, cumin, pepper, and corn. Layer cracker crumbs with corn mixture several times (first layer will be crackers). Drizzle some evaporated milk over the top. You can dot this with butter if you want. Bake at 400 in your newly cleaned oven until crusty and set; believe it or not, this really will kind of set up without an egg, but you can add one if you want insurance. Enjoy!
Posted by Ducks at 8:25 PM No comments: 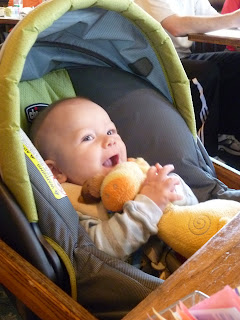