My brother was kind enough to forward THIS.

And I forward it to you because I love you.

And I'll share this because I may have missed some of you earlier this week when I emailed it around in glee. I don't eat turkey, but still. Tee hee!

I am thankful indeed for all of you. Happy Thanksgiving!
Posted by Ducks at 12:51 PM No comments:

Oh my Lord I forgot the Navajo Fry Bread!

I have been scolded and deserve it. We also stopped to pee about 40,001 times because I pee a lot, and one of the places we stopped was a souvenir shop named Chee's. There was a little attached structure just big enough to kiosk vend fry bread, with honey, cheese, or cinnamon sugar. We bought two... one with cheese and one with honey... to share because we couldn't resist, even though we weren't hungry.

Navajo fry bread is light and airy, puffy, filled with crisp bubbles against the chewy grain of the bread. My grandmother used to deep fry tidbits of her white bread dough every once in a while and call it Navajo fry bread... which it was not, but the yeasty chewy/crispness was similar and these really took me back. These were dinner-plate sized, foldably soft bread platters smothered in the topping of choice.

We tore the cheese one in three pieces and dug in, thinking dinner before dessert. All of us were lipsmacking and making ecstatic noises: it was delicious! But then we divided the honey-dripping bread and bit in, and all of us went reverently and joyously silent. Perfect. Scrumptious. We talked about getting another one, but we knew we were too full.

Stop at kiosks, people. And for that matter, eat what street vendors have to offer. This is how I see it: you KNOW their customers aren't there for ambiance. If there are options, and people are still eating from a street vendor kiosk or cart, that means the FOOD IS DELICIOUS. I used this philosophy while doing field work in Peru and it never steered me wrong... well, except that one time when they were out of beef hearts and made anticuchos from beef udder, which is, um, not too lovely -- but they apologized and asked beforehand if we wanted to try it, so that's okay. I don't mind sharing an experiment. And it was excellently prepared beef udder
Posted by Ducks at 10:45 AM No comments:

I bet you think we vanished off the map. 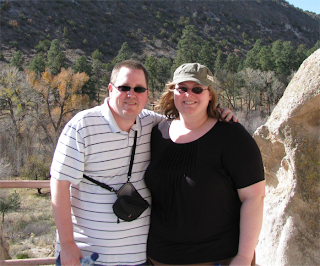 (Proof that we're alive and sometimes go in the sun... but not often.)

Facebook has a way of pulling my plug; I read what others have to say, fall into the illusion that I've participated in online communication, and then forget to say anything myself other than clicking the little thumbs-up or saying "yes, attaboy/girl!" So, bad on me and I'll try to improve my habits.

Well. Halloween was awesome. Robert had a kickin' party, everyone dressed up but me and Pat, although I wore my new Chewie is my Copilot shirt, thanks Dave & Jes!, and Robert recreated a drink I described for him that I had in a hotel on the way to our 20th anniversary cruise, involving cucumber juice and muddled mint and tequila and lime and sugar syrup and oh gosh it's great. And I brought a green gelatin tentacle decorated with boba balls drenched in gooey blue syrup, which was suitably grue a centerpiece although people did NOT eat enough of the fucker so it languished in my fridge for a week while I road tripped and ... do not leave jello jigglers loosely covered in the fridge for a week, or the texture resembles sex toys better not contemplated. Especially when tentacle shaped. Gah. I'm sorry. 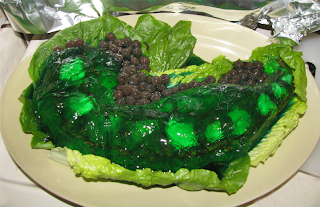 (Wearing its tinfoil hat, on my stove before the party.)

We road-tripped on reasonably short notice to Santa Fe to see my dad & stepmom, who are doing well and were very supportive about our decision to adopt. We had a great visit -- hiking Anasazi ruins, eating at Bobcat Bite (reportedly the best burger in the U.S. It was credible as a candidate!), making rafts of cookies for a church ministry (the ladies) and shooting at inanimate objects (the menfolk), and of course ROAD TRIP WOO!

Okay. For us, road trips are an opportunity to eat everything. Chicken Fry World. And we lose weight when we're trippin', which doesn't make sense at ALL but it is consistent so it's wonderful. Even if it weren't the Most Fun Ever. But it is. Soooooooooooo we planned our route to take us past Waffle House and Cracker Barrel at the right parts of the day and SCREW YOU if you laugh at us, because that's what the muthereffin' interwebs are for. Yes.

High points included pausing on the way home to watch The Men Who Stare at Goats and eat incredible pizza at Roma's Pizza in Flagstaff. If you are ever in Flagstaff, for God's sake go to Roma's: it's wonderful (eat the Southwestern Deluxe. Eat it!) and the wait staff is hot. As in all sports bars, the wait staff carries the social function of geisha, and the customer feels grand as a result of their earnestly affectionate attention. We were much refreshed. Low points included a really poor church service at our folks' somewhat millenarian church, including willful misreadings, challenges to find rules in the Bible that the preacher believes aren't there (hint: Leviticus. Oh, AND THE BOOK YOU ARE QUOTING, TWO CHAPTERS BEFORE THE PASSAGE YOU JUST READ US), proposed pogroms against women and gay people, and oh, yes... Hitler quotes. Today Santa Fe, tomorrow the world. Yee haw!

We also got kissed by Brunie the alpaca. This was more fun than it sounds like. 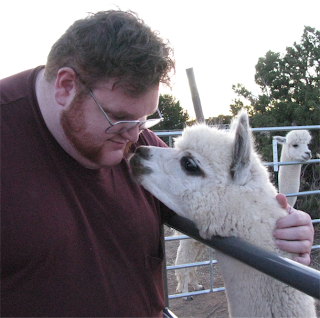 (Robert and Brunie, sitting in a tree... see him rockin' the chops? Rob's ain't bad, either.)

This is what we ate (and when did I morph into George R. R. Friggin Martin?): Gilly's Grill in Santa Maria, Curry House in Little Tokyo, L.A. (OH EM EFF GEE, yes gogogogo have some curry!), Waffle House in Phoenix (scattered, smothered, & covered, bay-bee), Cracker Barrel near Flagstaff, soup & my stepmom's awesome cornbread at dad's, traditional breakfast at dad's, lunch at Bobcat Bite (OMG, do this even if you have to hold hands and pray with your most sanctimonious relatives first), light DIY ham sammich dinner at dad's, cereal breakfast at dad's, lunch at Maria's, AMAZING beer-marinated pork ribs and baked beans at dad's, traditional breakfast with dad, Sonic (weird, because the onion rings tasted exactly like donuts filled with onions... which was not a big hit but was so strange we actually ate them all), Roma Pizza (yes!), Cracker Barrel again because it was breakfast time and hey, Cracker Barrel, Carl's Junior (in HELL, I mean Mojave). Then home to eat something reasonable. Um, Robert helped with all this via IM. So I'm not George Martin all by myself.

And a cautionary tale: do not go to Mojave. Holy shit. It was the meth-complexion, self-done-prison-tat, lead-paint-diet center of the universe. And we didn't find anything more promising to eat there than Carl's Junior, whose new sandwich, the Hot Carl or something, found us in hysterics that lasted until the creeps really kicked in. One of the three leviathan women next to us (and those of you who know what I look like know that I don't enter that conversation lightly, myself. Hee!) threw a fit because the meth-faced, prison-tatted waitron brought her a diet soda. Does she look like she needs a diet? She doesn't need no diet! ...which would have been merely comical if she didn't pitch a major fit about ketchup on her sandwich because she doesn't need no goddamn vegables! We left before she got back to stomping Tokyo, but she breathed fire... loudly... all the while we were there. (Pat said his penis retracted completely back into his body but I checked later and he lied, but you get the idea.)

Then back home to try to get our shit back together and rejoin Real Life and stop the Chicken Fry World tour. Oh, and I made an amazing meal. Sourdough apple pancakes and spicy candied bacon. You must make this meal, but not if you're not the marrying type, because people of the opposite sex will paratroop in in their fancy underpants trying to get you to commit.

Bacon: mix 1 cup white sugar, 1/2 teaspoon black pepper, 1 teaspoon chili powder together in a dish. Rub most of this mixture into 6 slices of raw applewood smoked bacon, pressing so it adheres everywhere. It takes a little massaging and you will feel weird about touching raw bacon so much. Lay the slices of bacon side-by-side on a parchment-paper-covered cookie sheet with a raised lip (you want a pan with sides to prevent oil/sugar drips on the bottom of your oven). Bake at 375 or so until you are done with the pancakes, or until the bacon looks done. Feel free to fidget with the temperature if cooking seems too slow or too fast. I think this is 30-40 minutes or so to get done. If it's crispy bacon, it will be shattering crunchy after it cools. If it's chewy bacon, it will be like sweet spicy bacon jerky. Divine either way. Oh, and use tongs to retrieve the bacon, it's got boiling, oily syrup on it. Seriously.

Pancakes: mix about 1 1/2 cups sourdough (what, you don't have it working? Y'all know it lives forever in a screw-top container in the fridge, right? Just revive it the day before you cook with some more sugar, flour & water) with about a cup of flour and just enough water to make it stirrable (not dough, but rather paste than batter). Add an egg, a couple tablespoons of oil, a teaspoon of cinnamon and a splash, let's call it half a teaspoon, of vanilla extract, and stir. Mix 1/2 teaspoon of baking powder, 1/2 teaspoon salt, and 1 tablespoon water. You want to mix that into the other mixture just before you start baking your cakes. Finely slice two cored Arkansas Black apples right off the tree, or suitable replacements. Heat a black iron skillet on the stove, over med-low heat. Put in a dollop of batter and push it with the ladle so it spreads out, and sprinkle apples over. Then cover with more batter. Don't be fussy, it won't hurt anything if the apples peep out but it sure as hell will be nasty if you add too much batter, because it won't cook through and you can't turn it if it's fat and flaccid and just do what I say. Let it brown until the top looks kind of dry between the apples. Then turn it and let it brown equivalently on the other side. You should get 2-3 pancakes from your batter, and they will be MASSIVE. One will easily feed a person, 1 1/2 will be gluttony.

Okay. And then we went to play Pat's new Con-X game on Monday, which was a lot of fun because it's a really good team and it's Con-X and puppies are crapping rainbows and all that. When we caught the crazy NPC man who might have been the murderer, he cried, "Bazooka Jooooooooe!" either as a call for help or as an expletive. I'm not really sure which, but as you might imagine, it's catching on.

So, Bazooka Jooooooooooe! and I'll try to update more often.
Posted by Ducks at 10:31 AM 2 comments: